Last week I got to solve a problem that only happened on a customer’s server: one of the endpoint always returned a blank page. Checking network log showed me that the response had no content. Since it didn’t happen on our development boxes, debugging needed to be done using log files and all kind of traces I could collect.

Perfview is a great tool to collect what a .NET process just did because it is portable yet powerful and has a simple GUI.

Examining a log file pointed us to a suspected method which is probably that last piece of my code that ran:

Briefly speaking, that method copied content from an HttpResponseMessage object to HttpResponse.OutputStream. Another important note is that it is an ActionResult.ExecuteResult method which is called by Asp.Net itself.

A colleague of mine helped using Perfview to collect a trace of what happened internally when the application served that blank response. Although all stacktraces showed that my code ran as expected without any error, the exception view revealed a hidden NullReferenceException happening deep down in Asp.Net framework code:

Up to this point, my guess was that the exception happened while content was being written to HttpResponse.OutputSream. However, I needed more proofs in order to find a good fix because I wouldn’t be able to test it on my development box.

I opened code of the CopyToAsync found in Github: 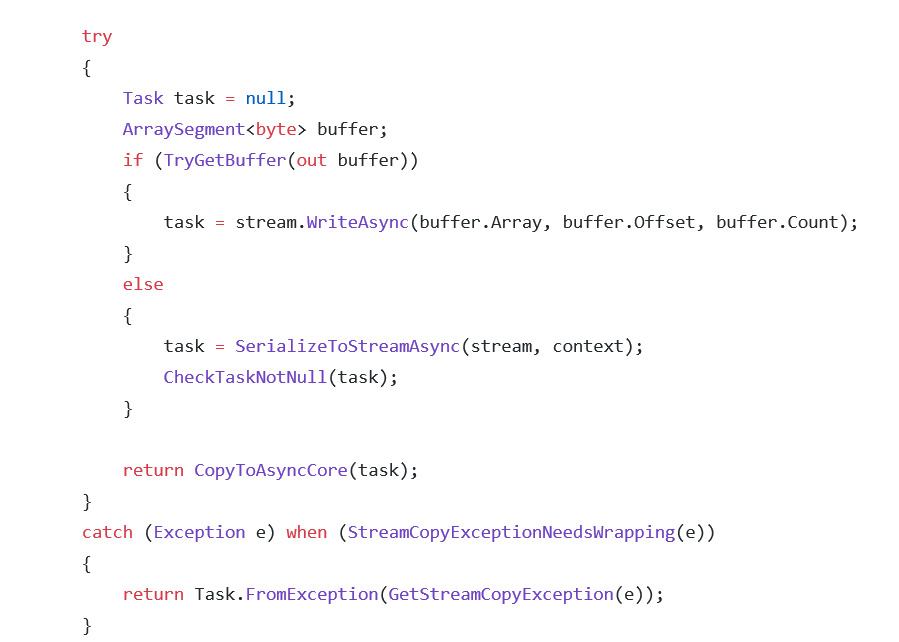 After checking the type of the stream object, I was able to confirm that code run into the “else” branch that called SerializeToStreamAsync:

Finally, code of the WriteToAnyStreamAsync code is:

By the way, I fixed it by changing ConfigureAwait to Wait. You might scream at me because they are two different things and calling Wait is evil, but I can assure you for this piece of code and for all the constraints that my web application has to fulfill, using Wait is the only viable solution. I wish Asp.Net team changed their mind about adding support for ExecuteResultAsync though.